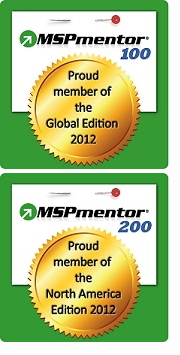 The Launch Pad has been ranked No. 72 on the fifth annual MSPmentor 100 list, a distinguished list and report identifying the world’s top 100 managed service providers (MSPs). Up from No. 92 in 2011, with a three year sales growth of over 245%, The Launch Pad also ranked No. 2 in the state of Florida and number 58 of the top 200 North American MSPs.

All of the honorees can be found by visiting http://www.mspmentor.net/top-100-msps

“2011 was a year of evolution for MSPs and re-strategizing the MSP delivery model.” said The Launch Pad CEO, Ilene Rosoff.  “We have all worked very hard to continue to be relevant and to grow as cloud services and other “deskless” technologies move into the SMB realm.  I am proud of our team and ithe innovation we and other successful MSPs continue to build into our services and for our client’s success.”

“Nine Lives Media and MSPmentor congratulate The Launch Pad for earning this distinguished honor and for its leadership position in North America,” said Amy Katz, president of Nine Lives Media, a division of Penton Media. “As our expanded survey results reveal, the annual MSPmentor 100 survey attracts MSPs from across the globe. Qualifying for our MSPmentor 100 Global Edition list is a great accomplishment.””

MSPs on this year’s global 100 list lifted their annual recurring revenues 28 percent to $1.04 billion, an incredible showing considering the economic uncertainty all IT services providers faced,” said Joe Panettieri, editorial director of Nine Lives Media. “Those MSPs are now managing 2.7 million desktop and mobile devices for customers, an incredible jump of 50 percent from 2010.”

MSPmentor, produced by Nine Lives Media, is the ultimate guide to managed services. MSPmentor features the industry’s top-ranked blog, research, Channel Expert Hour Webcasts and FastChat videos. It is the number one online media destination for managed service providers in the world.

Founded in 1992, The Launch Pad provides a suite of IT management and IT support services nationwide. Nonprofit organizations, professional service firms and small manufacturing companies are among those businesses benefiting for the RevITup™ suite of hosted applications, data backup and recovery, green technologies and turnkey virtualization solutions. With this latest designation The Launch Pad finds itself with a growing trophy case of awards. In 2011, for the 3rd straight year, the company was lauded by Inc. 5000 and Tampa Fast 50 of fastest growing companies. The Launch Pad is proud to announce they are officially offering franchise opportunities nationwide.

Interested in learning more about how technology can save your company money and increase your employees productivity? Contact us for a FREE Technology Assessment.